The tactical role-playing game sub-genre has always been a favourite of mine. It combines elements of both the standard RPG and turn-based strategy games. Watching as you develop a squad to your liking, carefully planning how to approach a mission and then seeing your decisions take share is quite a thrill. Tactical-RPGs can be quite challenging for those unwilling to invest the time and concentration required to succeed, but when you manage to be victorious it is very satisfying.

Although I have invested over 100 hours in games like Valkryia Chronicles II and Final Fantasy Tactics Advance, there are still others that fall by the wayside. Titles like Front Mission 3 and the Original Final Fantasy Tactics are titles I’ve longed to play but haven’t had the time to do so. In fact, the PSP version of FFT: The War of the Lions is downloaded on my PS Vita, waiting for me to dive into it.

Just about every tactical RPG can be considered a game most people ‘probably haven’t played’. This is especially the case as so many games of the genre are released on portable systems rather than on home consoles. That is probably why so few people have actually played or even heard of Level-5’s Jeanne d’Arc because it was released on the PlayStation Portable.

Over the years, Level-5 have become one of the most successful Japanese developers on the market. They have been around for a while, working on known franchises such as Professor Layton, White Knight Chronicles and were even responsible for Dragon Quest VIII and IX. But somewhere along the road after the release of two Dark Cloud games and before Professor Hershel Layton, they released their first tactical-RPG title, Jeanne d’Arc on the PSP.

Although based on the famous tale of Joan of Arc, the game also combines some interesting fantasy elements into the mix. While the events, names and locations seem to hold true to what occurred in the 15th century, the fact that Orcs, Magicians and that the future King of England was possessed by demons is probably not accurate.

Early on, Jeanne d’Arc mixes a lot of anime cut-scenes with in-engine dialogue. Within the first 3-5 hours of the game, you get a good idea on the situation Jeanne and her friends are in and see what lies in front of them. You learn of what Jeanne is capable of doing, what those around her think of her and understand the hatred that exists between the English and French. Although quite a bit is revealed this early in the game, you can still see that there is still a lot more to be shown and discovered.

Combat will be extremely familiar for anyone who has played any other tactical RPG outside of Valkyria Chronicles. You have an isometric view of your surroundings. You place a certain number of your squad on the battlefield and issue commands such as movement, use of items or attacks. Characters can also attach certain skills,  that allow for special moves to be used on the battlefield. There are various character classes and weapons available which allows for some interesting attack possibilities.

Again, pretty simple to grasp and this early in the game, there hasn’t been any real opportunities to go crazy with what is available to you. In fact, upgrading your squad’s equipment has been pretty limited. While there have been opportunities to improve stats to a limited degree, it appears that the developers wanted to make things as seamless as possible early on.

A few of the early combat situations have been difficult, but not because of the challenge put in front of you but rather not going into a battle properly aware of what is required of you. In one mission, you need to make sure that all your characters reach a certain spot on the map. If you leave your weakest unit as one of the last remaining members and you still haven’t taken care of all foes, don’t be surprised if the enemy targets that characters, kills it and results in you failing the mission. 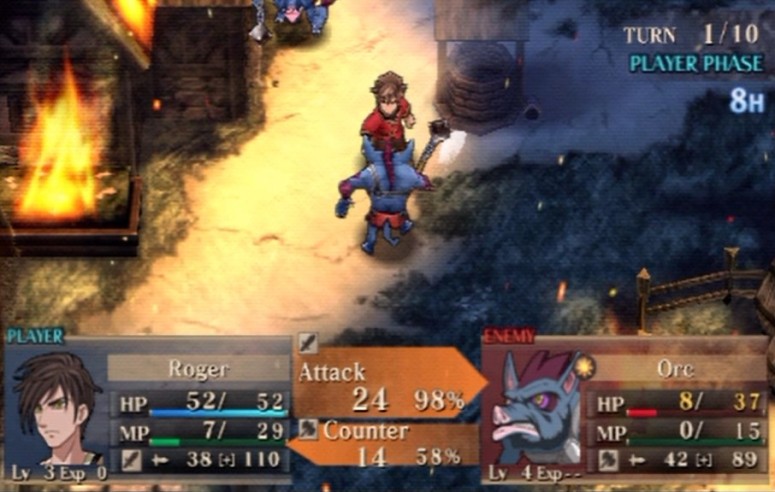 The characters in Jeanne d’Arc are engaging but there is still a lot more we can expect as we delve deeper into the story. Jeanne is a pretty interesting character even if you don’t know too much about the real history of the character. The same goes for the others in the game. Having some knowledge of the historical characters in the game may be helpful but in my case, where I have no knowledge of the history behind the events of the time-frame, you can still enjoy what is being offered to you. Being so early in the game, there are still characters to be introduced and as with most RPG games, there are bound to be some plot twists along the way that will see character behaviours change drastically.

Jeanne d’Arc does a good job in easing you into its world and is actually quite user-friendly. While the game hasn’t been that difficult early on, which may be a bit off putting for veterans of the genre, those playing it for the first time will appreciate the ease. Considering this is probably going to be a good 20-30 hour experience, the first portion of the game does more than enough to keep you interested.

Thus far, I have been completely absorbed in the game and am enjoying everything that it has to offer. Currently, I have just started playing the game’s second chapter but have taken some time to do some level grinding to improve my team going into future battles. As someone who has played other games in the genre, having an under-powered team as you go deeper into the story can make progressing even more of a challenge. Thankfully, Free Battle missions are pretty short and character leveling is easy.

It is clear as to why so few people missed Jeanne d’Arc when it was released in 2007, it was only available on the PSP. Even with Sony publishing the game and the pedigree Level-5 has, and if you owned a PSP, you may have not known of this game’s existence. On top of that, while you can easily download the game through PSN, it still hasn’t been made available for owners of the PlayStation Vita, which is something a lot of other similar games suffer from. There is a great opportunity for people to finally try this game but only a very small audience can actually do so.

In any case, I look forward to going deeper into this game and seeing where Level-5 takes the story.

The handling Jeanne d’Arc (and for that matter, all RPGs) will be difficult in comparison to the other games showcased thus far. Chances are that doing a First Impression and Final Thoughts within 5-7 days might be impossible since, unlike the other games, this won’t be finished in 5-15 hours. What will probably happen is that this one will go on a bit longer than the normal, one game per week; in that case, there will be more than two articles about the game over a 1-3 week period. In between, another game will be covered then returning to Jeanne d’Arc to give some insight; perhaps highlighting something that caught my eye. Regardless of how long it takes, there will be a Final Thoughts piece for Jeanne d’Arc.